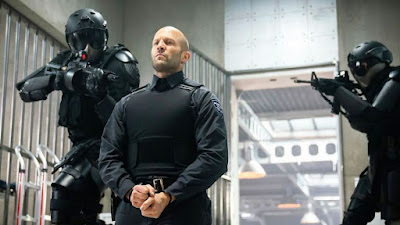 Jason Statham reteams with Guy Ritchie in a film based on a French novel that was made in to a French film a few years back.

The plot of the film has Statham joining up with a security firm. He's a regular guy who suddenly becomes not so regular when he singlehandedly stops a robbery.  We soon learn that Statham is looking for revenge against the robber who killed his son.

Going back and forth through time, this is not your typical Statham film. And in a way it's not a  typical Guy Ritchie film since its so incredibly hard boiled that it feels like the work of some one else. Its a dark and brutal film. People die horribly. Also at times things are frequently not clear (the relationship between Statham and the FBI seems to have unsaid things between them. I mention this because I know when the film came out some people didn't like the film.  Personally it took me about 45 minutes before I clicked with it.

I like the film. I like that the film is doesn't give us everything up front. I like that we have to work with it. I love the action sequences. They are brutal little machines. They are also don't do what you expect. For example Statham disappears from the final fight  at a certain point. Its not something that you notice right away, and while it seems odd it makes perfect sense.

If you are tired of the typical simplistic Hollywood action films this film is for you.