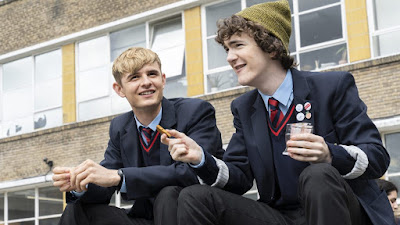 Amazon Prime's TV series based on the Alex ier novels by Anthony Horowitz is really good. I have onl watched a couple of episodes but I'm really impressed.

The series has Alex being recruited by MI6 after his uncle is killed. They hope that Alex can help them figure out what is happening at a school called Point Blanc.

Largely based on the second novel in the series (The first novel Stormbreaker was turned into a to compressed film) this is a perfectly paced film.  What I love abut the series is that the plot not only moves like the wind but also gives us everything we need to know abut the characters. There doesn't seem to be needless or endless exposition. We are told everything we need as we need it. I suspect a great deal of that is due to the fact that the story spins out in the right amount of episodes

The cast is first rate. Everyone is invested in what is happening. We like Alex and his friends and we hate the bad guys. I want to hang out with them some more,

Okay full disclosure I still have not seen the entire series yet. I was unexpectedly given access to the series in the middle of the last few weeks of festivals so I have been watching the series in bits and pieces as I go. I am watching bits around the other things I've promised to review. However while I should probably wait to finish the series, what I've seen is so good I had to tell you about it. (And consider the fact I don't as a rule cover series and I am covering this one)

Highly recommended. ALEX RIDER is available on Amazon Prime in the US. (and there will be a second season- woohoo!)