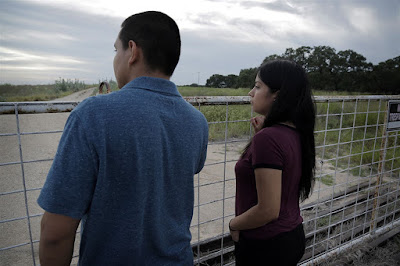 70 miles from the border with Mexico is Brooks County Texas . It is a place where tens of thousands of migrants die every year as they try to go around the immigration checkpoint. The government had set up check points in places near land where it would be dangerous to cross. They figured that it would make people not want to cross. The trouble was it didn't deter anyone and deaths spiked. The film focuses on the officials tasked with collecting the endless number of bodies, those trying to help the migrants and families trying to find lost loved ones.

I really liked MISSING... a great deal. I have seen a good number of similar films but there always seems to be a disconnect with the subject. The filmmakers seemed to take a slightly distant view of their subjects. Here that doesn't seem to be the case. We feel for very on. There is a sense of being in the place an truly being effected by the events unfolding before us with the result that the film sneaks up and hits us from behind.

I was deeply affected by this film. There is something about it that has hung with me beyond many other similar films. I think largely it is because it doesn't give us all the answers, not dos it paint everyone as one thing or another. Yea the government plan is stupid but beyond that we are left to quietly draw our own conclusions.