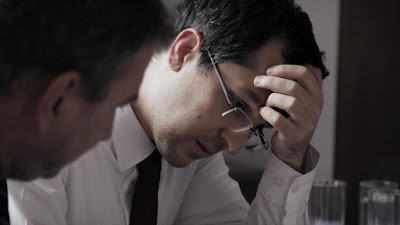 One of the current expected Oscar contenders COLLECTIVE concerns the aftermath of the the Collectiv night club fire in Romania. Not only were there no fire exits in the building to get people out. 27 people died that night and 180 were injured. The hospital burn wards being filled. In the weeks that followed another 37 people died in hospital. However they didn't die from their wounds but the infections they got from being in the hospital. The newspaper Gazeta Sporturilor began poking around and they discovered a healthcare system so corrupt it brought down the national government.

Belt in boys and girls this is  one hell of a ride. I paused the film 20 minutes in to Tweet that with over an hour and a half to go the film had reached the point where most other films would end. That's a statement that tells you just how bad things were/are and how much digging had to be done. This is a story that keeps going and going to the very end. I just stared at the screen slack jawed.

As has been pointed out this is a story of not only a broken system but of entrenched corruption. We hear stories of kickbacks, bribes, cronyism and all sorts of malfeasance that will make your head spin. It is a dire warning to everyone everywhere of what happens when government officials get too close to the private sector as the maker of hospital supplies paid off hospital officials to make sure they used their tainted products. Its a chilling account that mirrors some of what the Trump administration has been trying to do during its term in office.

I was and still am horrified. I should discuss it more but even with reading reviews on the film I was nt prepared for what I saw. See it for yourself and be punched in gut.