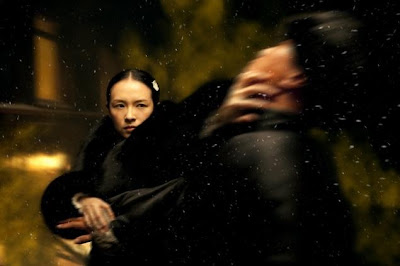 This is the review of the cut version GRANDMASTER that played American theaters a few years back
I originally saw the original cut of Wong Kar Wai's THE GRANDMASTER back in May. I was haunted by the film and posted some thoughts on the film (you can read them here).  The Weinstein Organization picked up the film for US release and after making some trims for the International market Wong Kar Wai altered the film further for US release.  Anyone who saw the original cut was flabbergasted. David Ehrich wrote an excellent piece on the differences between the versions which inflamed things farther.(His piece is here)

Several of the Unseen crew saw the film when in played at New York's Museum of the Moving Image and liked the film (though none had seen the original version. So I figured everything was okay. They all suggested that I see the film on the big screen...

Earlier tonight I made a trip to a multiplex and I saw the American cut for myself and my feeling is very mixed.

My reaction to the film is kind of akin to seeing the various versions of Sergio Leone's ONCE UPON A TIME IN AMERICA, if you don't know the full version, the shorter one comes across as an interesting mistake with lots and lots of things missing. Like the Leone film watching the American GRANDMASTER you kind of like whats there but you know that there is something missing and wrong about the way the film is done. Its clear that either an idiot put it together or stuff was chopped out.

I'm not going to argue which is the better version, the longer one is better. There is a simply lyric poetry to the longer cut that is completely missing from the shorter one. There is a hell of a lot more going on thematically as well. Or more simply put what the film is about differs depending upon which version you see.

The first thing you notice with the shorter version is that the sound mix is different. How the film sounds is completely different with some sequences losing the sound of the fighting/action and replaced by music, some of which seems different. The mere shift in sound makes the film play differently since we are in a different head space.

In trimming the film of some 25 minutes the look of the film has changed. There seems to be much more slow motion camera work. I haven't checked it but a couple of times sequences I remember as playing out in regular speed now are slowed way down. Where in the full version, while there is a great deal of it, it never over whelmed, here it does.

The second thing you notice is everything is explained in titles. We know are told who people are. We are told when we are. Events are explained, occasionally before we even enter a sequence, which makes the film less a dialog with the audience but more like being spoon fed. The narration in the film has been altered as well continuing the over explanation of everything.

The time frame of the film has been rejiggered. No longer does the film shift through time and space, rather the film tells the story, pretty much in order with the result that events that should move the audience don't.

The biggest change is that the film instead of being focused on the Grandmasters and their notions of martial arts and honor, and related matters, has now been changed into the simple tale of Ip Man and his relationship with Gong Er. Its a changed that removes several characters (Ip's wife disappears after one or two sequences) and it dumbs down Er's character to the point of being unrecognizable. In the original cut there is much more going on than the flirtation and the drive for revenge, there is a need to be the best and to be her father's daughter and successor. Almost all of that is gone. Actually they've altered the film so that there now really is a romance, where there really wasn't before.

Astondingly the Japanese are pretty much gone from the story. A large part of what happens in the long version depends on the Japanese and the war but now they are barely a factor. For all that happens it could be simple rivalry between schools not nations.

Actually what we have in the short version is the story of Ip mashed into the story of Er. Because so much or the original plotting is gone you have whole sections of the film where it's as if we are watching Ip's movie or Er's movie, there is no sense that they are really part of each other's story except for a small section where they meet and fight, the letter exchange (which plays here like a big WTF) and the final part of the film.

The short version is pretty much an arty version of a simple martial arts tale that we've seen any number of times before, namely the rise of a master.

And while the long version is infinitely better than the short-even if it will confuse some with the insistence to be poetic, the short version does kind of work on it's own terms.

There is a reasonably okay biography of Ip Man with in it (thanks in part to the frequent titles and altered voice over).

I do like that we get the years when events transpire. One of the problems with the longer version is that its not always apparent when things are taking place. Since we don't know things play out differently. Watching a couple of scenes in the shorter version (say the ones with Ip Man setting up his school) knowing the years the events take place makes it play differently than not.

The short version is also more or less just a straight forward martial arts film and not a meditation on anything more. All the poetry and much of the lyricism is gone. If you want just the fights then it's great, if you want more then it's not.

I would love to try and work out what the Weinstein's reasoning behind the trims are, I mean beyond the money, because they are frequently capable of giving American audiences things that they shouldn't like like silent movies, but at the same time they wreck Asian cinema with a wild abandon that's frightening. They wreck it and then wonder why people don't go to their versions...

...while The American GRANDMASTER isn't quite the normal Weinstein defacing of an Asian film, I don't think it accurately represents what Wong Kar Wai intended even if he did cut the film.