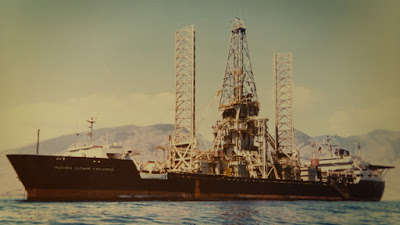 This is the story of the CIA plot to lift a sunken Soviet submarine from the bottom of the Pacific Ocean.

This may not be one of the great films at DOC NYC but it is one of my favorites. This is one crazy story. The story begins when the US government stumbles over the wreckage of a sunken submarine.  The Soviets had no idea where it was or how to raise it. The CIA has no idea how  either but they have people who might and the money to try. From there the story spirals out to include Howard Hughes, Watergate and some other things you'll just have to see to believe.

While the film could have been just the story of something totally crazy it blooms in the second half into something more, a very timely examination of  censorship and the government. The discussion comes out of the fact that the head of CIA took steps to kill the story. Its warning of what can happen when the press kisses the ass of the government too much.

This is a great story, expertly told. Get some popcorn and curl up with this film.