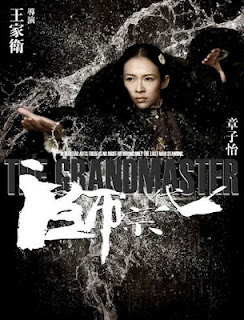 (A note to start: This piece is my reaction to the original cut of the film. The film was trimmed for international release by Wong Kar Wai and then further trimmed and altered for American release thus removing some 25 minutes from it's original 130 minute run time. I will post when I see the American cut. For those wishing to know the differences I'm going to direct you here for David Ehrlich's excellent piece on the changes)

This isn't going to be a review as such, I'm going to let Eden or some of the others here at Unseen review the film (I'm not sure what I think of it) instead I'm just going to comment on some things that have struck me about the film.

When you first see the film, it's clear that the film is a Wong Kar Wai film. From the first frame to the last. Each image is carefully composed to the point of ridiculousness. Reality never looked this good, ever. This is a beautiful film that you could just play it as a moving work of art.

The trouble is that the film is so gorgeous that all of the tiny shots, flames, burning tobacco, dripping ink take precedence over the main story. I got frustrated by all of the little shots that distracted me from the human element. It wasn't until hours after the film had finished that I got past the small shit.

One of the most frustrating thing about the film is that the film is being billed as a film about the Yip man.... the trouble is that while he is a character in the film, he is not the main character. The main character is in fact the Zhang Ziyi character. She is the daughter of the master of the 64 Hands technique, and it's her journey that drives and shapes the final 100 minutes of the film. As the film stands now Yip man is merely a means into the story and a way of steering things around to the real character.

Watching the film for the first time I was frustrated and annoyed. Why spend ten years, as Kar Wai  had done, trying to make a film about a character only to push him aside? Per haps the change came in the editing which resulted in THE GRAND MASTERS becoming THE GRANDMASTER.

The film is very much like Andre Tarkovsky's ANDRE RUBLEV where the film is nominally about one character when in fact its about something else. Ultimately though unlike ANDRE RUBLEV, the film is ultimately titled correctly, it's just not titled in regard to the person we think it is.

The fights are masterful and in a way even more unreal than most other martial arts films. Think about the impossibly long train that travels behind the combatants in the final fight. There is also no rawness to the combat, it's all poetry as the men and women trading blows are seen to be partaking in the ART part of the martial arts

Some of the film vexes me. The opening battle in the rain is  incredible but what is it and why is it at the start. The fight promises a film that doesn't follow. Additionally the narration promises something that we don't see either, this is never really Yip man's story- even to the point where he sets up an office in order to teach martial arts the sequences have no real narrative point although they do end up acting as a Greek chorus to the main story.

How is the film? Taken on it's own terms and after careful consideration it's actually quite good, You have to get past the film not being a biography, and instead being an examination of philosophy- it's really about  who will be the successor of the Gong clan- and how the differences in philosophy will determine it. Yip man is merely a person outside of the battle. Yes he ends up anointed at one point, but even so  he disappears, and in the course of the film found not to really be the one.

Is the film worth seeing? Yes it is,just go in completely open minded and expect whatever  the film throws at you and not what you may think the film is about
Posted by Steve Kopian at November 26, 2020