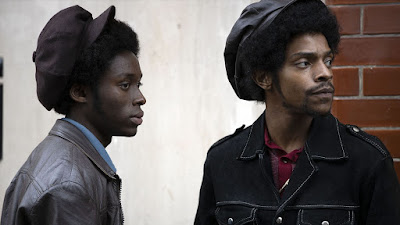 Fourth film in Steve McQueen's Small Axe Collection is about the early days of writer Alex Wheatle . who was arrested and thrown in jail during the Brixton uprising. While in prison he confronts his past where he was raised in a children's home, while his cellmate encourages him to begin reading as a way of educating himself about the past.

Weakest of the film the Small Axe Anthology, ALEX WHEATLE is the one  film I am least likely to revisit. More a polemic than a story, the film feels more like a collection of ideas rolling around waiting to be put together. While I know what Steve McQueen is trying to say, I'm not sure he is saying it in the best possible way.  This is is also the first of the films where I think the ideas overwhelm the narrative. Forgive me but in MANGROVE, LOVERS ROCK and RED, WHITE AND BLUE McQueen managed to make his point while also telling us a compelling story.

And while I seem down on the film do realize that my reaction is the result of comparing it to the films that went before, something almost no series could live up to.

Worth seeing in context of the whole Small Axe collection, I'm not certain how this film will stand on it's own.