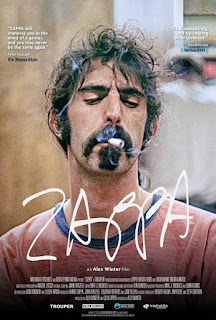 Alex Winter's ZAPPA is going to take some jabs from critics because of what it leaves out.  To hell with them. The thought that anyone could actually think that one could encompass the life and times of Frank Zappa in a two hour and a bit film is insane. Zappa was a towering figure who quietly made music his way, fought for his rights and those of others, and quietly changed the world as we know it. The only way this film could be more complete is if Ken Burns did a five night PBS event series.

Made with the cooperation of the Zappa family who opened up their archives this film covers all of Zappa's life, or as much as they could fit in two hours. While it's more or less straightforward there are odd (visual) asides that create a sense that anything can and will happen.

This is a heavy film. There is a lot to process.But it's to expected because Zappa did so much. He never stopped until the end. I got half way into the movie and I wanted to stop it because there was so much coming at me I was feeling overloaded. I know that may sound bad, but it's not. I had seen earlier bios of Zappa and I was trying to match up what I thought I knew ith what I was seeing. It's something similar to what sometimes happens when you sometimes hear some of Zappa's music and you try to sort it out in terms of what you knew before. You have to let go and just let Frank speak.

I loved this film. I love that it revealed so much about Zappa that I never knew. I also loved that I know that anyone who doesn't know him will fall in love with him. They may not love all his music but Zappa was a great musician and hero for our times.

Highly recommended ZAPPA is playing at DOC NYC before hitting theaters and VOD later in the month.