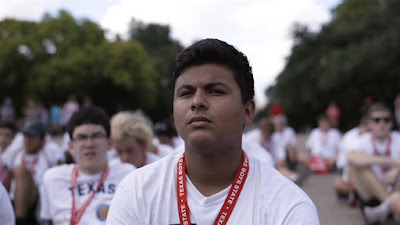 A look at the annual gathering of young men at the Boy's State conference which brings them together in a mck state election in order to teach them how the political process works.

This is a good look at the how future generations of politicians are taught how things work. Focusing on the Boys' State held in Texas, the film introduces us to several young men who in a few year might be in the running for state or federal office. In many ways it's a hopeful experience since we learn that there are genuinely a number of people out there who care about tomorrow. On the other hand we do see that some of the boys will do anything to win, with one boy describing the eventual winner as a perfect politician but not meaning it as a compliment.

To be honest I liked this film but I didn't love it. I know that the current presidential election effected my feelings for the film in that I am so tired of politics that the last thing I needed was two hours of concentrated politicking, even if it was for something that didn't have potentially dire consequences.  I'm sure many people are going to feel similarly, which is kind of sad since I'm certain away from the current shrill real world political scene BOYS STATE could be enjoyed for what it is which is an excellent look at the political engine.

Recommended for those who aren't tired of politics.