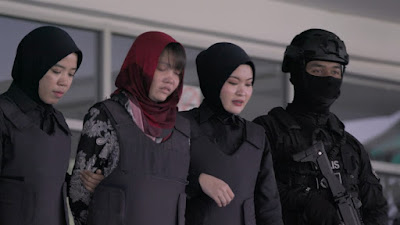 When Kim Jong-nam, the brother of Kim Jong-un was killed in an airport in Kula Lumpur it was clear it was an assassination. The two women who commited the crime, they put the VX nerve agent on his face were caught and charged with murder. However things were not so clear cut. They didn't seem to be true believers and simply seemed to be acting in a reality TV rank show...and there were at least 8 North Koreans connected to them who seemed to disappear rather quickly. As the women headed toward trial and possibly the death sentence it became a rush to try and save their lives.

This is a crazy story. It's the sort of thing that no one would believe it was put out by Hollywood, but it's true. Its a story that I went t expecting to see as a goofy "oh those crazy North Koreans" only to find that the story is something much more. The craziness turns to horror and sadness as you realize that the women are being hung out to dry because someone has to pay.

I was hooked  early on and I couldn't step away. Normally I'll stop a film and run out and get a drink and a snack, but I just had to see how this went. This was too crazy not to watch every minute.

I absolutely loved it.

One of the great films of DOC NYC, the film is a must see.