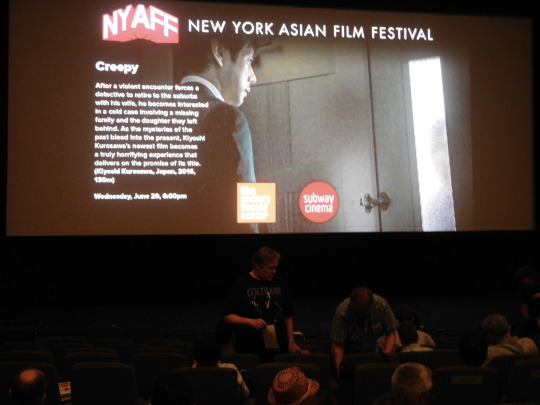 With CREEPY playing Metrograph's virtual theater starting Friday here is my review when the film played the New York Asian FIlm Festival a few years back
Kiyoshi Kurosawa's CREEPY is the master in full bloom for good and bad. This film is both the man who made PENANCE, TOKYO SONATA and JOURNEY TO THE SEA as well as the one who did the second REVENGE FILM, REAL and BEAUTIFUL NEW BAY AREA PROJECT. Its both the art house god and the king of quickie schlock-and trust me I know I'm a huge fan and I own most of his films.

CREEPY is the story of a police detective who ends up on the wrong end of psychopath. Retiring from the force he becomes a college professor. However after a colleague at the school asks him to look into a weird missing persons case that's classified inexplicably as a crime he ends up drawn back into the game. More so when one of his old cop buddies is found to be investigating the same crime as well. Of course things get a little close for comfort when one of his new neighbors turns out to be really creepy.

I really like this film, but the turn in the film during the second half from straight on serial killer film to fun house ride kind of threw a monkey wrench into the proceedings for me. Don't get me wrong I like the film, but I loved the first half film, its the second half where logic and reason goes out the window I have problems with. The easiest way to describe it is to imagine sitting in a theater watching the best thriller ever and then you turn your head for a second to find you're now in a burning a clown car that's driven by a maniacally laughing John Wayne Gacy toward the edge of a cliff. You want to know how the hell you got there...

For me the moment that things broke apart as the moment when we first get a look inside the neighbor's house. We go from the typical  interior  into this long gently sloping steel and stone hall with windows and I suddenly realized that the interior could not in a million years be part of the house whose exterior we've seen. Things get worse when you see all of these underground rooms and realize this is a madman's lair that would have taken work crews years to build, and not the four or so people who live there.

In the second half character behavior is determined by needs of the plot as our hero's wife suddenly and sporadically behaves as if she is interested in the weird guy despite being creeped out by him, wanders around drugged out, though no one notices and suddenly claims martial issues for no determinable reason. Mio the "daughter" of the crazy guy alternately flees in terror from him, dropping all the clues that things are not right with him, and does his bidding.

The list of plot contrivances in the second half could fill a book as things move along at a good pace but in no way that makes any real world, or even first half of the film sense. From the wife getting strung out on the neighbor's drugs when she really hates him, except when she doesn't, to a police lieutenant going to a house alone and then going missing long enough for the bad guys to get away to the wife turning and re-turning against the husband and neighbor to the cops arresting the husband for kidnapping at a time when no one would have known he was home to pretty much everything that happens.  Seriously I could keep going with every twist and turn from the disappearance of the first cop but that would be simply stating everything that happens because none of it makes a lick of sense. (I'm guessing it works in the source novel where things would have room for it all to be explained)

To be perfectly fair the second half is tense and gripping, but not because it's a well plotted film, rather its because the film is flying so far off the rails that you stare slack jawed at the insanity, terrified at what unbelievable thing is going to happen next. We've seen enough nastiness that we know anything is possible.

Walking out of the theater last night I was asked what I thought and I said I liked the film, loved the first half and kind of hated the second because its another film from the first. (My hatred has softened, but I'm still not high on that second half)

When I got home I got into an exchange on Twitter with my friend Nate Hood who loved the last half hour. On it's own terms its good, but not attached to the first half of the film. Nate pointed out how J-horror films tend not to make any sense, and while that's true to some extent, it's also the reason I don't like most of them. The really good ones, or the ones I like, work internally. To be certain the weirdness can't happen in a real world, but with in the world of the J-horror films they can. CREEPY violates that simple rule all over the place. As I said above the whole second half isn't even consistent with itself, never mind the first half or reality. (Perhaps if nothing made sense it would have worked better since the normal would be a variation of the Mickey Mouse Club's Anything Can Happen Day)

The film is a mess.

Yes it's gripping and compelling, but it doesn't hold together when you look at it.

And I enjoyed the hell out of it while it as on, but I don't ever need to see it again, and I like it way less than I really should

Not so much bad as a Kiyoshi Kurosawa one, which ultimately means even in going off the tracks its a fire ball that's more interesting than most trains that stayed on.

(At some point remind me to write about how the film is a solid mediation on how we interact with our neighbors, not to mention a glorious example of how to use sound to accentuate the action instead of music.)
Posted by Steve Kopian at November 30, 2020