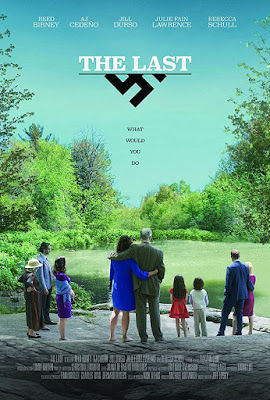 I saw THE LAST  before it was released. I was asked to give my thoughts and then I was asked not to review it because they were still making plans as to what to do with the release. I put it aside and went on my way and only thought about the film as curio. Recently I had the film come up in a discussion and I realized that with the film officially out in the world  by almost two years I should get my thoughts out of the draft folder.

The film concerns a couple soon to get married. Josh considers himself an Orthodox Jew. His family is different degrees of Jewish. His fiancé Olivia is converting. One day while at the seaside Josh's great grandmother starts talking about the past and the carefully woven fabric of the family's existence is turned to ash.

At this point I am going to go off in an odd direction and discuss the structure of the film before that I think of it as a film. Structured as a very deliberate  series of discussions, writer director Jeff Lipsky has made a film that for the most part feels like a story for the stage. It's not that the film is static, though the longest sequence is essentially a 45 plus minute monologue, rather it is a series of talks that bring us to a certain crisis and then the resolution. Its a structure that many "meaningful" plays use because the structure doesn't really work in the "reality" of film and feels contrived. When most films use it the result is not a film but a polemic.

The film's strength, and part of the problem many people are going to have with the film is the centerpiece 45 minute monologue delivered by Rebecca Schull. It's a seeming single take talk where the matriarch of this Jewish family reveals who she is and what she feels. Its a stunning piece of acting that would break an audience in a theater. And it both brings the film to life with it's tale and delivery and stops the film dead because it is largely static. Give Lipsky points for trying it, but how many will see the film depend upon on how successful they think he was.
While I most certainly have been haunted by the film I'm not really sure what I think of it. I'm leaning toward thinking it's just okay. The problem for me is that while the story and structure would work on stage, I am not certain it works on the big screen. As I said it does things that cry out for the intimacy of  live theater. Lipsky is trying to make a point (lord knows what it is) and the cinema screen requires a bit more subtly. The need to make his point also hampers the cast since many of the normally great actors give mannered performances. (And I am not so sure that a woman who so easily reveals the horrors of her soul as if it is no big thing would not have had them escape prior to the most inopportune moment- and I'm not sure we need a 45 minute monologue to get there or if it is anything more than a button push)

Ultimately I appreciate what the film is trying to do, I just don't think it actually does it. 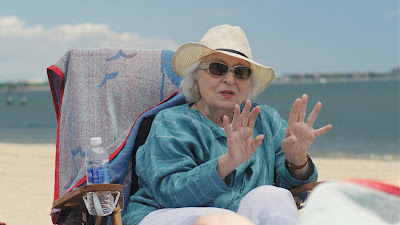