Other Side of Madness (1971) hits home video 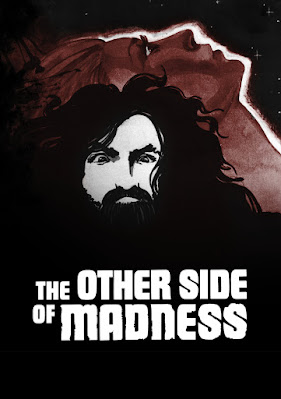 THE OTHER SIDE OF MADNESS is a creepy film. Its a dark and moody film that leaves, rightly, a bad taste in your mouth. In its way it maybe one of the best films on the Manson murders you will see.
That THE OTHER SIDE OF MADNESS is a one of a kind film is due to a lot of different factors. First and foremost is the fact that the film was shot during the trial of Manson and his cohorts. The script was altered as new facts came out. It is also the only one that was actually shot at the Spahn ranch, which burned down right after the film was finished.
The other reason that the film is unique, and why it works, is that not only hadn't director Frank Howard made a feature before, but also that he was allowed to make the film any way he wanted as long as he stayed in budget. The result is a film that looks and feels unlike anything out there. It feels like a low budget independent film at times, at others, like the murders it feels like a documentary and at other times it's experimental.
The film doesn't move in a conventional manner.Much of the film is in flashbacks from the trial. Dialog is kept to a minimum. There is voice over of people's thoughts.
I wasn't certain what I thought at the start. It felt off for a little bit. And then I fell into it. It challenged me to work with it, it challenged me to consider what I was seeing.  I love that it didn't do anything in any sort of expected way.
I suspect that the film's refusal to be conventional is why the film is only a 5 out of 10 on IMDB. I think everyone was expecting a typical exploitation thriller so the audience who would love it never found it and the exploitation crowd was confused by it.
Thankfully the film hits home video n November 24.The Bluray and DVDs  put out by a The Film Detective is really cool. Containing a commentary track, some killer short docs and a solid book. Its a wonderful combination of information on the film that puts the film into context. There is also a special edition that comes with a  bonus CD of music from the film and Charles Manson. (I have it  but I'm kind of unnerved at the thought of listening to it.)
If you want to see a small forgotten gem trackdown THE OTHER SIDE OF MADNESS
Posted by Steve Kopian at November 22, 2020