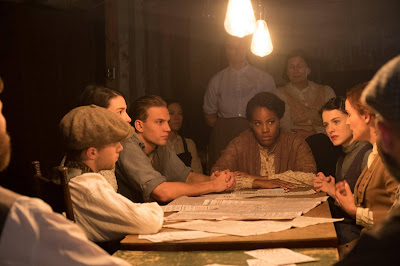 I'm really mixed on this film. I mean I'm really mixed. A good story, some great songs and some kick ass performances are lost in a musical that probably should have remained n the stage.

This cinematic musical is set during the Winnipeg general worker strike of 1919. It focuses on two Ukrainian immigrants, a father and son, who are trying to bring the rest of their family over. The son finds romance with a Jewish suffragette. Her brothers oppose the relationship since immigrants are taking away their jobs. Also in the mix is a refugee from the racial violence in America. Its full of romance, politics and social issues  making for a heady mix.

When you transfer a musical to the screen you have to do something to make the songs work. You have to create a world where it is believable that people will burst into songs. The best thing to do is mix in a little unreality. Unfortunately STAND never manages that. It is firmly rooted in  reality and you never fully buy the songs suddenly happening. And that's a problem because the film collapses as a result. Had the film been entirely sung it might have worked but only occasional song works against it.

To be honest this would work on the stage on the stage. We buy people singing on stage. We also are more accepting of the musical structure which goes for emotion over reality. (and of the fact that all the clothes look brand new and were never worn). This would be a great stage musical but it's not a very good movie one.

STAND will play US theaters only n December 1st. For more information and tickets go here