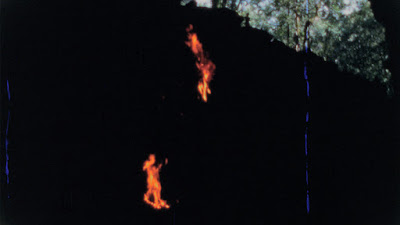 This is a film that is made up of audio recordings made by Michael Rockefeller in 1961 when he was part an expedition to Dutch New Guinea sent to study the Hubula people. (This was the same expedition from which Rockefeller would famously disappear.) The film is almost entirely composed of a simple black screen while we listen to the audio. (there are some text passages and roughly 2 minutes of film footage)

True cinema of the mind as we listen to to the sounds of life in the Hubula village as well as to some discussions between the anthropologists themselves. It's a trippy experience, especially if you can watch this is a darkened room and let the sounds wash over you. If you can you will drift off to another place and time.  In all honesty I would love to be able to see what the people watching this film see in their heads.

I really liked this film a great deal  not just because of what it revealed but also because it made me ponder what cinema and documentary cinema was.

If I might be allowed to quibble about a couple of small moments, I found some of the on screen text out of place. I'm not sure why there is a reference to Michael's father's sending in the police to Attica prison as part of a list of connections of the Rockefeller's to New Guinea. Additionally some of the later passages are explaining the politics of governing of the area seem equally out of place since they didn't seem to have a bearing on what we had been listening to.

Recommended for the adventurous and open minded.

Email ThisBlogThis!Share to TwitterShare to FacebookShare to Pinterest
Labels: anthropology, art of the real 2020, documentary, science