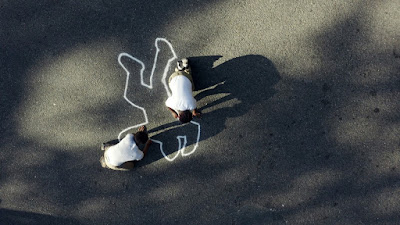 Kimonti Carter was sent to prison in 1997 for a drive by shooting that killed an innocent bystander. He thought he was shooting at a car full of the rival gang members. He was wrong and was sentenced to life without the possibility of parole because of Washington State's Three Strikes law. Where that might be a good thing in some cases, in Carter's case it's a disaster since Carter seems to have rehabilitated and now educates the other inmates.

While nominally Carter's story the film is actually something much greater. Carter is only the jumping off point for an examination of how Carter came to be in prison and how society and its racism and need to keep the poor down created a situation that traps millions of  African Americans every year.While the film specifically shows how it happened in Carter's Washington neighborhood it speaks to the larger issue of America as a whole.

Covering as many films as I do I see a number of similar film every year and as a result I can say with certainty that SINCE I BEEN DOWN is one of the best. Insisting on talking to everyone who might have a real insight (there are not many academics here) the film gives us the real story from the mouths of the people who are living through the problems it seeks to correct. Watching the film this was one of the few times where I felt like I was getting wisdom from a life lived and not from a book read.

This is a great film tmakes you think and feel and makes you want  to actually go out and try to solve the problem beyond the twenty minutes after the film ends.