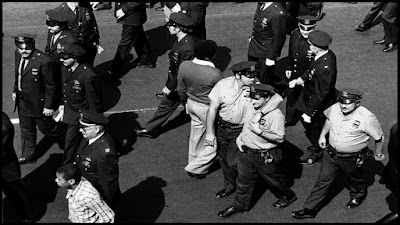 Portrait of  Bob Leuci who was the subject of the book and Sidney Lumet film PRINCE OF THE CITY. Leuci was a New York City cop who revealed to investigators the deep level of corruption with the legendarily stupid remark "I will not give up my partners" which effectively damned the lot of them.

Good but a bit odd recounting of Leuci's life by the man himself, his family as well as friends and enemies. The strangeness comes from the fact that this is largely Leuci trying to put the record straight but the whole matter is so bent that listening to him comes off as if he is still trying to clear his name despite knowing he's guilty as sin. Clearly he's still bothered by it all but at the same time he comes off as a guy who is trying to make it seem like what happened really wasn't that bad. To me it's always been worrisome that Leuci only turned when it became clear they were going to be coming for him very soon since it seemed like a true effort to save his ass rather than real remorse.

To be honest this is a case that has fascinated me since it happened. It was the first time that I was ever really made aware of the level of corruption in the police force and what that meant. Watching the film I was hoping for something more revealing. I was hoping that Leuci wasn't still trying to whitewash his misdeeds, that really didn't happen with the result that this film never really is anything more than good. As much as Leuci would like to think otherwise he really can't be only a little bad.

Recommended for anyone interested in true stories of police corruption.