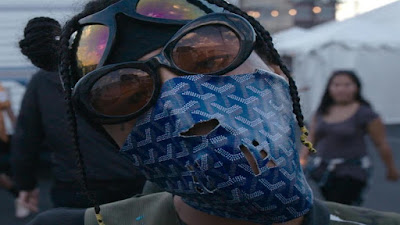 Billed as a look at the rise of Soundcloud rapstars, this film is a kick your legs out from under you look at not only the music business but also the internet/wired age we lived in where kids trend toward getting likes and followers for the things that they do.

To be honest I started watching AMERICAN RAPSTAR by accident. I clicked on the wrong film in the library and instead of going back to the film I wanted to see and simply let kismet drive what I saw. While I expected  to see young people performing and talking about their music I didn't expect it to punch me in the face. I didn't expect it to be less about the music and more about the society that generates the feelings that drive the music and the framework that spreads it along. And I never expected it to have a stinging running commentary, in this case by by New York Times writer Jon Caramanica, that holds a cold spotlight not only on the kids and their music but society on a larger level.

Watching AMERICAN RAPSTAR I was floored. I didn't expect to be not only engaged by what I was seeing but also challenged by it. What does this mean for the kids and society on a larger level. I don't know. Certainly this is a film that asks a lot of troubling questions that I'm not sure many parents are going to want to deal with.

To be certain the film is raw and jagged and imperfect, there are sections that don't work as well as others, but over all this film has a life and presence that few films I have seen in the last few years can match. Clearly the filmmakers have something they want to say and they are going to grab us by the throat to make sure we hear it.

AMERICAN RAPSTAR is a darkly troubling film that is definitely worth a look.