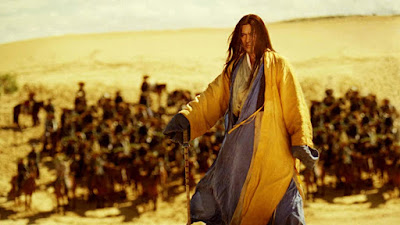 This review is of the original cut. REDUX played the New York Film Festival several years ago  and is a rethink of the film that plays slightly better but I realize that I still feel the same way about both versions of the film

Wong Kar-Wai makes a martial arts film that is a visual wonder-though its mostly close ups-and a bit hard to decipher because the story is told in what could be generously said to be a fragmented style (and has a great number of close ups). Its has something to do with two friends who meet every year to drink, wine that makes you forget your past, revenge, another swordsman and some other things that I didn't quite pick up. I'm not sure what to make of the film. The dialog is really great, but at the same time walks that knowing sort of edge that makes me wonder what Kar-Wai was up to. Apparently breaking down since in the middle of making this he wandered off to clear his head by making Chungking Express. I liked it as pieces because I can get my hands around the pieces but as a whole I'm not to sure of the plot-if its good-if it means anything.

Kar-Wai has cut the film once more which from reports seems to be close to the original cuts with a few changed shots, some image manipulation and a slight alteration in music. I have no idea if this will improve or detract from the film which some people see as a a masterpiece. Some things I've read have tried to put the film into a context based upon Wong Kar-Wai's other films, implying that if you've seen other films by the same director this film will be easier to digest. Maybe, but I'm not too sure since it plays differently than any of his other films (and I've seen most of them).

I don't know. I'm going to have to ponder this.