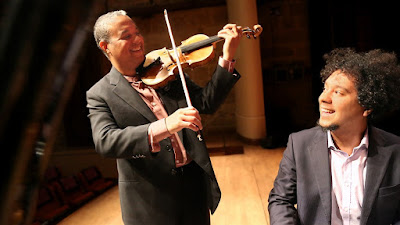 This wonderful film is about brothers Ilmar and Aldo López-Gavilán. Born in 1970's Cuba thy both took differing musical paths. Ilmar was sent to Moscow to study violin when his teachers realized he was a greater talent then they could handle. He never lived in Cuba again, ending up in the United States. Aldo remained in Cuba becoming a classical and jazz pianist. While the brother always managed to stay in touch and see each other, they never had the chance to perform together....

I had been getting emails about LOS HERMANOS for a couple of weeks before it was announced at DOC NYC. It was going to be playing a couple of festivals and I kind of pushed it aside. Even when I had access to it at Globe Docs I passed over it for other films. That was a mistake on my part because this is great little documentary about music and family and how music can keep a family connected. THat last part resonated with me since in the last few weeks since the passing of my dad the music that has passed between my brothers and myself have kept us connected.

There is so much to say about the film, from how it is a portrait of two guys you'll want to hang out with, to the great music, to the sense that you are really hanging out with them as they tell their story. However I want to just mention that while all of that is good what you'll remember is the small moments. For me the one moment that I will always carry with me is the one where Ilmar talks about getting audio cassettes from his brother playing music. While he loved the music, the thing that made them special to him was the background sounds, people talking, of walking by, of the sounds of home that he missed. I love how he mentions how that kept him connected to "home".

I was moved and delighted and you will be too.

Highly recommended the film can be streamed at DOCNYC.net