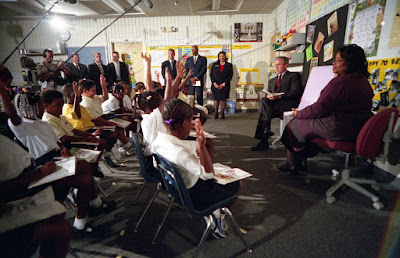 This documentary is about the kids who were reading to President George Bush, on September 11th, when he found out that the twin towers had been hit.

Bush wanted to kick off a reading initiative, and so he went to Emma E. Booker Elementary School in Sarasota Florida. This school had one of the lowest scores in the city, but after a new reading program there, their numbers soared.

The documentary has the students, now in their 20's, looking back on that day. They were in 2nd grade, so a lot of them didn't know what a president meant. Just that he was a big man. The day started off, with the students feeling like they were in a movie. Their parents cut their hair, they put on perfume.  The day was supposed to be about aspirations and dreams.

Most things that come out about that day, focus on Bush in the classroom, with a man whispering something in his ear.  The director wanted to make a documentary about the kids who were in that classroom.

The students talked about seeing their teacher crying for the first time and how that was strange for them. She played the song "hold On" and played it all day.

The documentary goes through and shows all the students now and what they've been doing, and are currently doing with their lives.  Some also talked about how that day impacted their lives. The students reminisce over what their classmates were like back in second grade.

I really enjoyed this documentary.  I had never given much thought about these students and I enjoyed learning about them.  My favorite part of the doc was their reunion with their second grade teacher, who was in the classroom with them. It was very moving, and made me feel emotional.