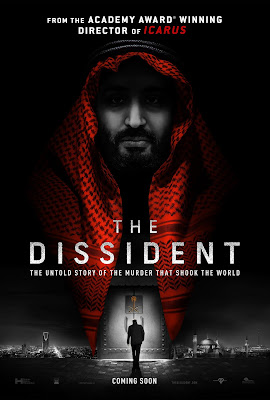 This look at the murder of Saudi journalist  Jamal Khashoggi will buckle your knees. While firmly focused on the murder of Khashoggi it spins its net farther afield and paints a chilling portrait of a government racing to unchecked oppression and madness on a grand scale.

THE DISSIDENT wants us to know that things are not well in Saudi Arabia. Things may look bright and wonderful but the men controlling the country have slipped into making it a paranoid dictatorship. Anyone who does not tow the party line is hauled away and murdered. They do not want any free thought and they use intimidation and an army of tech savvy people to try and control the thoughts of the masses. Troubled by the turn of events long time insider  Jamal Khashoggi left the country, even to the point of divorcing the wife he adored, and moving to the US, in order to be able to speak his mind. Khashoggi did just that but the Royal Family wanted him muzzled and when an opportunity to kill kim arose they took it, never expecting it to blow up in their face.

While the murder is the thread that binds the whole film together the film also shows us the cost of the Saudi madness. Paralleling the Khashoggi story is the one of Omar Abdulaziz, a Saudi national who fled the country when his Twitter posts criticizing the Saudi's put him on a list of people to be detained. While he fled to Canada the Saudis still want him dead. They have detained and tortured his brothers in the hope of silencing him and the Saudis have sent hit squads to try and silence him. Its a scary tale that gets scarier when its revealed that they are bugging/hacking the cellphones of anyone and everyone they see as a threat or of interest (like Amazon boss Jeff Bezos, who realized something was up when the crown prince was sending him texts about things he had never discussed with him)

This film rocked my world on so many levels I am having a hard time processing it all. Coming at a time when I was all movied and especially documentaried out, THE DISSIDENT  made me sit up and take notice. I didn't do anything during the whole time it was on, not even taking notes. I had to see it right them and there. The only thing I did while watching it was to replay some sections because I had to see them again after I picked my jaw up off the floor.

What makes this film so great is that this is more than just the story of a murder, but it is a story of the cost of that murder, we see the toll it takes on Khashoggi's fiance, Hatice and his friends and acquaintances.  Additionally the film is a stark warning of the madness that some governments may seek to embrace. As someone says about the Saudi government, the people respected the government until they started to crack down on the opposition in an unjustified manner.  It shows how social media is being used to try and win the hearts and minds of the masses. It makes you wonder where will this all lead?

This is a truly great film. Its a stunning timely and important film that speaks volumes about a great many things.