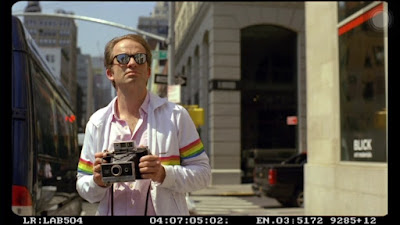 Dream big or face reality. Hold onto the past or watch it be torn away from you. That’s the narrative of An Impossible Project, a documentary torn between reality and the story it tries to tell. Directed by Jens Meurer, the film is, more than anything, a love letter to analog, to the technological world of buttons, rotors, and greasy machines, more so than the digital realm of touchscreens, memory, and CDs. It’s about the physical way we interact with an older form of technology and the emotional connection that’s thereby created. “My theory,” says Dr. Florian “Doc” Kaps, “is that the biggest difference between digital and analog is the fact that digital always just tickles two of your senses. It’s always I can see, I can hear it. But it’s always behind the glass screen. I cannot really touch you, I cannot smell it, I cannot lick it… it’s nothing real.” Analog, by extension, is as real as technology gets.

The two subjects of the story are Doc and the Impossible Project, the latter a group of analog enthusiasts who bought the last surviving Polaroid factory in 2008 as the company was about to shut it down. The Impossible Project hoped to revitalize the industry of instant photography. The problems standing in their way were many — as the team’s name implies — including the facts that they didn’t have Polaroid’s instant photograph chemical formula, Doc was running the group without knowing how to run a business, and investors weren’t exactly rushing to pay into an expensive, failing industry with a small niche of enthusiasts.

Meurer’s film reads as an elegy for the analog, a deeply nostalgic look at something that doesn’t belong in the modern world. He peppers in images of Polaroids taken across many many years, a testament to the legacy of the photographic medium. He doesn’t hide his disdain for smartphones, for digital media in the narration; An Impossible Project even begins with an anti-digital disclaimer.

The argument for analog is not always an easy one to make, nor is the film able to convey it in a significantly compelling manner. Remember how long it took to dial rotary phones? Remember how annoying a key jam is on a typewriter? How expensive a pack of just a handful of Polaroid (or Fujifilm) film was? Doc is called “Doc Quixote” and his impossible dream just seems like a lot of work. The best version of the argument is one offered by an Impossible Project employee: the work is not about proving that analog is better than digital; it’s about giving people a choice, and making sure that choice doesn’t disappear.

Reality is always just around the corner in An Impossible Project, and for that reason, the narrative feels disjointed. (Spoiler alert) Doc gets fired from his own company, and while he continues exploring possibilities of revitalizing analog technology, he never really gets terribly far. He has meetings, talks, even a lavish dinner in an abandoned Grand Hotel, but there’s this nagging feeling that he’s looking for miracles that never fully materialize. Meurer is fascinated by Doc’s story, but still keeps hopping back to check in on the Impossible Project, run by the former intern/son of the main investor who usurped Doc to become CEO.

The documentary meanders a bit and is dry in places. When its subjects get passionate, you can feel that passion.There’s just that question of whether their analog dreams are yours too.