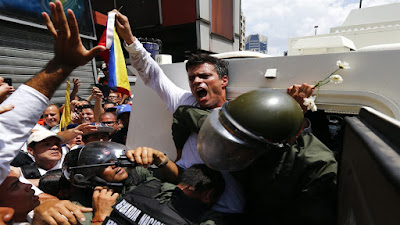 Filmed over 3 years A LA CALLE is look at the opposition movement to Venezuelan President Maduro who took control of the country as the economy began to falter and then ran both into the ground. Full of interviews with leading players as well as people on the street, the film is a you are there look at the pain and suffering being inflicted on a country by its leadership and the struggle to stop the pain by getting the dictators out.

This is a good look at the situation in Venezuela from the standpoint of the opposition. There is no effort made to talk to anyone in power, and as a result they only appear in passing news stories on the situation. Not that there could be anything for them to say since it's clear from the footage that thy aren't liked and completely out of touch with reality.

If there is any real flaw in the film it assumes that you have a working knowledge of the situation in Venezuela. I say this because while there is some effort to explain it simply, I found that I understood more of the basic situation thanks to having previously seen an episode of John Oliver's show and some other films.

Still if you have a working knowledge of the unrest this film is excellent and worth a look.