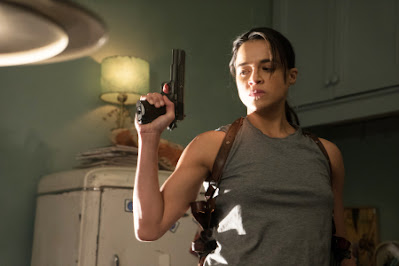 The original plan was for THE ASSIGNMENT was to make it an exploitation film in the 1970's.That would have probably resulted in a trippy and legendary film looking back forty plus years later.   The problem was director Walter Hill held on to the script and changed it up and finally made it forty years later and promptly fell on his face, never mind a really offensive film.

The film is told in flashback. A defrocked doctor is looking to be released from the mental hospital. She has to explain what happened two years earlier when she was left shot in a room full of dead bodies. In telling her story we learn karma came to call when the hitman she turned into a woman as revenge for killing her brother came back to get even.

Even allowing that the film is a huge ball of bad taste for exploiting the trans community, this film isn't very good.  Yea, the action sequences aren't bad but mostly I spent my time staring at the screen wondering how this bad film happened to good actors.

Actually the thing is that Sigourney Weaver, Tony Schloub, Michelle Rodriguez actually kind of make the film work while you're watching it. I mean that they are so invested in the film that we buy it enough to keep watching. Never mind that none of it makes sense, even in a pulp movie sort of way, we keep watching hoping for some turn that makes us go AH HA. It never comes and we are left with a mess that makes us go "What in the holy hell was that?"

I have no idea.

As a long time fan of Walter Hill I have been always entertained or amused by his work but this one just doesn't work and should be missed.

Email ThisBlogThis!Share to TwitterShare to FacebookShare to Pinterest
Labels: not worth the effort, thriller