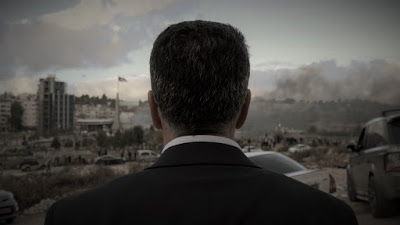 MAYOR doesn't behave like a documentary. As the film opens and the mix of the images and the lush Oscar worth score make the film seem like a drama or a thriller. It goes along for a while as a nice portrait of a nice guy  in a nice city, but then this portrait of Musa Hadid, the Mayor of Ramallah gets serious. Donald Trump unexpectedly announces that the embassy of the US in Israel was going to be moved to Jerusalem and things get messy.

When I started Mayor I didn't understand why the film was being talked about a possible Oscar contender. By the time it ended I knew why, this is simply a great portrait of a great man. I want him to run a country. He seems to be largely unflappable even in the face of violence.

But the film is more than just the portrait of Hadid or his office, but it is also a  bracing look at the relationship between Palestine and Israel. Since Ramala is essentially the capital of the Palestinian state it is the lightning rod for everything. When things go wrong, things burn.  That anyone can remain calm is somehow miraculous.

I loved this film. I loved everything about it from it's craft, to its subject to all the thematic threads. I love that this  is a film that works on many different levels, that it entertains like a drama and makes you think. This is a magnificent film.