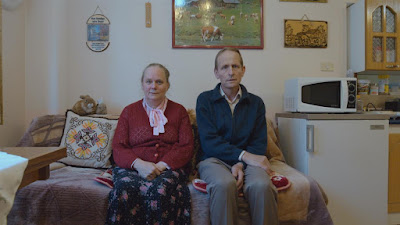 You will forgive me if my piece on Songs of Repression is short but watching the film was one of the more surreal experiences I’ve had recently. It wasn’t odd because of what the film is, but rather because the film gave a completely different take in the Colony of Dignity than several recent films.  Films such as the animated Wolf House recounted the abuses and horrors that occurred there from 1961 until 1997 when the group's founder Paul Schaffer left.  During that time there was rampant abuse and the colony became a place where Pinochet could take his political prisoners to be tortured, murdered and disappeared (the colony has mass graves on its grounds)

Songs is the story of the colony today. After everything that went down there are still 120 or so people living there. In the film the residents show us their daily routines and talk about the past, both the good and bad. It’s an eye opening film that forces us to ponder all sorts of including how survivors of tragedy  process things and how those same events are seen by the outside.  The collision of those two things is seen early on when a couple of people make reference to the dark events and the news coverage and they ponder why no one ever came to ask them about what happened.

This is a heady examination of a great many things and I still haven’t unpacked them all. Additionally this is a film that slowly creeps up on you as the bright opening  of the opening gathering of residents and the singing of the song slowly gives way to a repressed darkness that begins to come out. The kids are not all right and they aren’t always happy at people peeling back the scab. Having spent time with several other films on the subject I thought I was ready for this but I wasn’t and as a result I need to really think some more about the film.

This isn’t to say this anything but a really good film, but rather I need to take time to truly ponder its contents.  Frankly if I didn’t have the crush of DOC NYC films on my plate and the need to get a review up for the festival I would have sat on this review a while.

If you want something that will  give you food for thought and make you ponder human darkness I recommend Songs of Repression. It will sneak up on you. (I also recommend it if you’ve seen any of the other films on the colony since this gives a different take on it.)