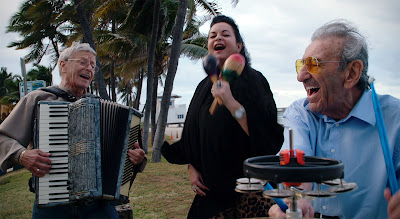 SAUL & RUBY'S HOLOCAUST SURVIVOR BAND is a life affirming film. It is the story of two Holocaust survivors who decide to put a band together to celebrate just being alive.  Their hope is to one day go to Poland and play in memory of the 6+ million Jews who were killed in the concentration camps.

If you think you are having a bad time you need to meet Saul and Ruby. Sure bad things happen but at the same time  they keep going because they have to. Watching the film I found that I smiled a great deal and I cried just a little bit.  Watching the film I wanted to find the guys and just give them a big hug.

The film is the story of the men and their lives. We watch as the band is formed, and play some dates. We also get to see them over the course of their lives as things happen.  And then they go to Poland and play  their music, and visit the ghosts they left behind. It is a story that will move you. It moved me.

I also like that the film that is  rooted both in the now and the past ends with a warning- anti-Semitism is on the rise and there is a deeply moving statement that we must let history repeat.

This is a gem of a film and is highly recommended.