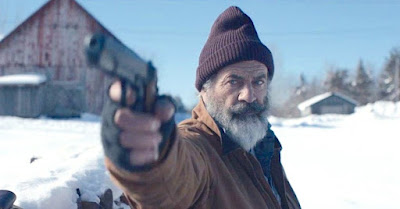 FATMAN is destined to become a Christmas classic. Yea, its been dropped in and out of theaters before being put on VOD, but trust me, watching it I had the exact same vibe that I had watching A CHRISTMAS STORY way back when- "Why aren't there more people talking about this wonderful film?" Granted  FATMAN is not  like A CHRISTMAS STORY, I mean it has a higher body count, but it is still a wonderful film that is genuinely moving in the right way. It does say a lot about the Christmas spirit and how automatic weapons are a last resort.

Mel Gibson is Chris, aka Santa Claus. Living in the middle of nowhere he is a grumpy old guy who makes toys for his annual run, and occasionally does a side job. He is married to Ruth, an award worthy Marianne Jean-Baptiste, and struggling to make ends meet. Things are so bad the US Government has to subsidize him. However  because there are so few kids deserving of getting gifts his subsidy has been cut and he is forced to take on an order for the US Military. Meanwhile a rich and totally evil child is pissed he got a lump of coal and he hires a hitman, who has issues with Santa, to hunt him down and kill him.

Full disclosure this is not really a comedy. There are funny bits, but it is not a balls to the wall funny film and if you go in looking for that you will be disappointed.

This is not really an action thriller since there isn't a lot of action, it all comes in the final 20 minutes. It is however suspenseful since you don't know how this is going to play out.

This is a film that has it's own rhythms and way of looking at the world. It is in no way cookie cutter or like anything you've seen before and we are are better  for it. Trust me. And if you don't think so now in a year or two when you see it again you'll see I'm right. I know that the fact that this film doesn't fit in any slot is going to annoy any number of people. "What exactly is this film?" they will ask. The answer is it is its own glorious thing that manages to be a lot of different things, none of which check off any ticky boxes in the expected ways.

What this is is a Christmas story  about Santa and his job- and the need to be good and how we have to get over the bad things that happen to us because happiness can't be given to us.

I love that the film allows Chris to be cranky. I mean he is surly. He's been doing the Santa thing for centuries and you can feel the weight on him. Yes he loves his wife, more on that in second, and his friends, but he is really worn down as his business is failing and people aren't believing (they shoot at his sleigh). You can feel the frustration and anger when he is confronted by the military offer.

Mel Gibson gives a towering performance as Chris. He is a broken an who is just trying to get by. Watch his performance as he addresses the elves to tell them that he has to put them to work making fighter jet control panels because he needs the money. This is a man broken by life. Seriously, watch his eyes, and his body language and the small gestures. Gibson isn't acting rather Santa is inhabiting him. You want more proof watch the scene where he finds the files left for him by Ruth to remind him of the reason he is doing what he is doing. Watch the subtle changes as the pictures of the happy children push a button and make him reconnect to life. This is an Oscar worthy performance.

The only thing better than Gibson is Marianne Jean-Baptiste as Ruth. Oh my god does she kick ass. It's not a showy role on the face of it but it is one that you will never forget (she is the one character you will carry away from the film). You completely understand her quite passion for Chris, and you feel the centuries of love when you realize  she truly means that she and Chris have each other's backs. When it's said you think its sweet but then you see it in action and you fully understand, no one fucks with her man.

The romance of Chris and Ruth is one for the ages. It is one of my top five all time great screen romances, like Nick and Nora. Seriously. As I said you feel the love between them. You completely understand how a look or a touch or a word connects them, or soothes them. Yes, it can be testy between them but you feel the love and understanding of a long married couple bleeding off the screen. Their marriage is a hard fought one of the unconditional that everyone wants.

The villains are vile. Billy, the rich monster child is the sort of sociopath that needs to be locked away, but never will be. He is funny you will laugh at the ridiculous things he does but a he is still scary. Walton Goggin's Skinny Man hitman is chilling. His hate-on for the fatman who couldn't give him the one thing he wanted is frightening. When you stop and look at him you feel the pain of decades bleeding off him, especially in the final section where he has Santa in his sight.

Is the film perfect? No. The Chris stuff is better than the villain stuff. Some of the turns don't fully work, especially when Goggins is getting closer to Santa are a bit careless. However at the same time this is a film about Santa so they got the right part perfect and besides its a holiday movie so you kind of have to be a bit forgiving going in.

Without giving anything away, while I loved the film before it, what made the film a true and absolute classic for me were the final two scenes. One is one of the greatest badass sequences I've ever seen, I was screaming "sequel! sequel!" at the TV, and the other is one of the most hopeful sequences of the year. It all made me feel good.

Highly recommended for anyone willing to take it for what it is.

(Though be warned this is violent , bloody and foul mouthed at times and bloody so don't assume its good for the kiddies)