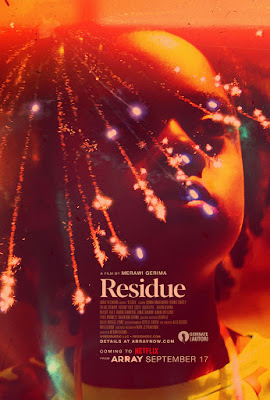 Write about films for too long and you run out of metaphors for dreams. Like a word you turn over and over again in your mouth until it’s just an abstract sound, all the adjectives for dreams have lost their punch for me over the years. Surreal. Lucid. Oneiric. Hypnagogic. What do these words truly mean anymore? Then along comes a film—and more importantly, a filmmaker—that reminds you why these words were once so important to you. Residue is one such film and Merawi Gerima one such filmmaker.

That he is the son of Sankofa (1993) director Haile Gerima is irrelevant, for his is a voice so utterly unique and personal that it defies easy comparison. Is he Chris Marker by way of Spike Lee? Charles Burnett with an iPhone? A street-smart Jonas Mekas? None of these are sufficient. To watch Residue is to surrender oneself to a totally new, totally original vision. Inspired both by his upbringing in a redlined DC neighborhood and said neighborhood’s savaging at the hands of white gentrifiers, the film is both autobiographical confessional and kaleidoscopic rumination on memory, trauma, and yes, dreams.

The story: young filmmaker Jay (Obinna Nwachukwu) travels from his home in L.A. back to his childhood neighborhood in DC to reconnect with old friends and family to gather material for a film he hopes will “give voice to the voiceless.” He finds instead that he may as well be on Mars: much of the black community has been priced or bought out; the old family homes have been gutted and subdivided for white twentysomething renters; the few remaining stragglers see him as a foreigner and treat him alternatively with aloofness and contempt.

As Gerima peels back the layers of history and memory, past melds with present as does the imagined with the real. Ghostly specters of adults as children and children as adults appear and vanish like smoke. Characters appear like Resnaisian riddles without introduction or explanation like Blue (Taline Stewart). (Who is she? His childhood girlfriend? Did she come with him from California?) White people are amalgamated into an oppressive presence, shot from afar, from an angle, or not at all. Jeering, unseen cops hunt the streets. Prison cells become forests and kitchens human abattoirs. And at the center of it all a little black boy, now a black man, who can never go home again