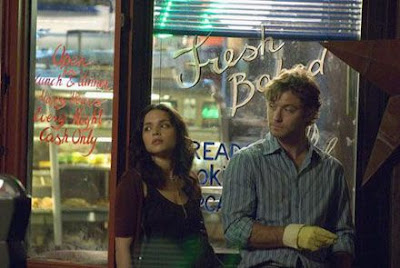 This is a repost of a piece I did for IMDB before Unseen was ever started
Wong Kar-Wai's first English language film. Nora Jones stars as Elizabeth a young woman who walks into Jude Laws Cafe after her boyfriend dumps her. After several nights there eating blueberry pie she heads off on the road where she meets a cop in Memphis and a gambler in Nevada.

A decidedly uneven mix of a movie that doesn't add up to much. Kar-Wai's beautiful camera work produces some great images but his some time use of slow motion is over used to the point you'll want to hit the fast forward so you see something at normal speed. How the film is shot also produces an overly cramped sense. Much of the Jude Law sequence seems to have been shot through the windows of the café and from one angle. The Memphis sequence is like that as well.

The story about relationships rarely springs to life in more than in fits and starts. Its all moments not a whole film. I have no idea why Elizabeth goes traveling other than as an excuse to meet the people we meet. It fragments the film and takes us away from the most interesting thing in the film the chats with Jude Law.

The cast is good with the up and down Natalie Portman in up mode as a gambler who meets Norah Jones (fair at the start but gets better as it goes) in Nevada and travels around with her. Rachel Weisz as the wife of the Memphis cop is far from English herself as a woman with a thick southern accent.

The joy of the film is the music. This has a stunning soundtrack that drives the film when the writing lets everything else drift. I kept going just to hear the music.

The weakest of Kar Wai's films I've seen. There is a good movie in here but it needs to be remade.(I'd love to see the Jude Law bits in a different context)