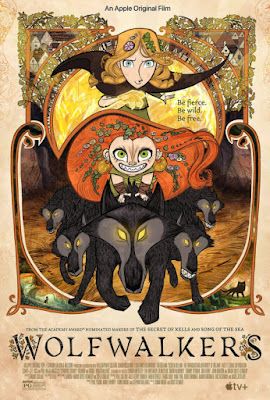 Cartoon Saloon hits it out of the park yet again with WOLFWALKERS, the story of Robyn, a young girl in Ireland who befriends Mebh, a young wolfwalker, a person who can leave their body and take the form of a wolf. Mebh is trying to find her mother who went off in her wolf form and hasn't returned. Complications arise because Robyn's father has been tasked by the Lord protector to wipe out all the wolves.

I love the work of Cartoon Saloon. They are consistently turning out films that amaze, delight and pull us in with a weight that no one else attempt with any regularity. In their films there is darkness. The bad guys are really bad. Things don't always end perfectly happy. There is a cost to to victory. When they are done you actually feel like you've been on a trip somewhere and had a real adventure. The best part is even when they seem to lose their ay they always pull it together in the end.

What I love about the studio's work is that while there is a house style, like say Studio Ghibli, it's not so over powering that each film could fit into another of their films. Yes the designs are 2D and Celtic based, but they are not exactly precisely the look every time. Each film has its own design and it's own palette which prevents you from ever saying "which film is this from" (something I've said about Ghibli backgrounds and characters)

One of the things I love about WOLFWALKERS is its use of color. During the opening sequences the colors are "normal as we see life in the town, however they get more and more brilliant as Robyn explores the forest. Things go muted as they return to the town. In the final section of the film  everything is dark, blacks and blues with splashes of fiery reds. It's all perfectly chosen and the colors elevate the fear and suspense. Likewise the amped up colors of the coda brighten our mood before the credits roll.

While I am mixed with the occasional drift into a cartoony style that runs counter to the more rigid background designs, I do love that it does allow for a wider range of facial expressions. In recent years I have rarely  seen 2D animation present such a glorious range of facial expressions. It's kind of like watching an animated silent film with whole volumes of text and subtext revealed in a look or a move. It's all in the artists line work which is masterfully rendered in ways that move you. (and I want to know whose idea it was to allow some of the sketch lines to come through at times. I initially thought it was either a mistake or an odd choice until I realized that the inclusion actually added to the emotion. Don't ask me how, but replaying a couple of shots I realized they wouldn't have been as powerful with out them.)

To be honest the final act of the film is one of the most magnificent things I've seen all year. The final section, probably the last 40 or 45 minutes just is a masterclass and masterpiece of cinematic art. I don't mean just animation but all cinema. The final battles to save everyone who needs saving (sorry I'm not telling) is just WOW.

The voice cast is magnificent, with Simon McBurney being a freaking terrifying real world baddy. Yea he's Boo! Hiss! but at the same time you feel his evil is really close to us now. Equally good is Sean Bean as Robyn's father. He manages to give a  fully rounded performance as hero, a concerned dad and just a guy who doesn't quite get it. He moves you with just his voice and you realize how good he really is.

The last act also is really tense. Not only has Cartoon Saloon designed it to be oppressive but they also made us understand that there is a cost. People can die. Bad things can happen and not come back. Unlike 99% of all the animated films that come out there is weight and cost for everything that we have felt from the beginning. Things may not be alright and it adds to everything.  I know some parents won't like the darkness, but the world isn't always bright and fluffy. Cartoon Saloon understands that and makes it so that when good things happen they are that much sweeter.

As I said WOLFWALKERS is a masterpiece.

It is a must see.

Currently in theaters (if you can go see it there do so), the film was picked up by Apple TV and will be appearing there soon.