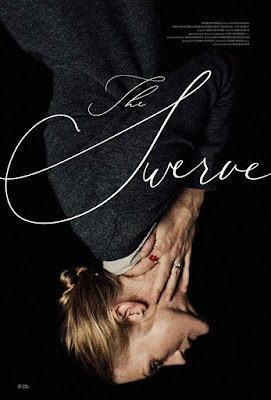 I'm kind of shocked that Dean Kapsalis' film THE SWERVE played a number of  horror film festivals. Not because the film isn't horrific, it is, rather it is rooted in the horror of everyday life, with the monster being the beasts that are other human beings.

The film charts the downward slide of wife and mother Holly.She is profoundly unhappy. Her kids see her as a driver and maid. She suspects  her husband maybe having an affair. Despite her best efforts she slowly begins breaking apart, even throwing herself into an affair with one of her students. But it is all for naught and the slide down the razor blade can not be stopped.

I'm late coming to the game with THE SWERVE. It has been kicking around for over a year now. Despite it playing several festivas I was covering I never felt a connection. It came out on VOD in September and I passed on it because I couldn't see skipping something I was more invested in. I let the film slide. Then suddenly a couple weeks ago the performance of  Azura Skye as Holly was mentioned by several friends as an Oscar dark horse that could actually win.Then last week in the middle of a discussion with Liz Whittemore about DOC NYC she stopped talking about documentaries to drop an impassioned bomb that I absolutely had to see THE SWERVE before going back to talking abut whatever films we were talking about. Intrigued I contacted the PR people concerning the film and asked for a screener.

While I have problems with the screenplay, some of the turns such as Holly's annoying children, are a tad too one note, there is nothing wrong with Azura Skye's performance and I completely understand why she is in the Oscar mix. Real and raw her performance is like watching an exposed nerve in a tooth scream when something touches it. It is a performance throbbing with pain and suffering. It is so painful to watch that there will be several points where you are going to want to turn the film off just because you don't want to see her bleeding all over the place. You  may almost feel that if she was wounded animal you'd kill her just to free her. Sadly that isn't possible and the wounds keep accumulating.

How good is Skye? I think she has a real shot at getting an Oscar nomination and perhaps the statue. If this was any other year I would be less certain but because many f the high profile films have been moved a small performance like this that outshines the overhyped work of bigger stars has a shot at being recognized.

While watching the film is kind of like taking repeated punches to the face, but with all the bruising raiding up on your soul, I still highly recommend THE SWERVE for anyone wanting to see a great performance by a great actress.