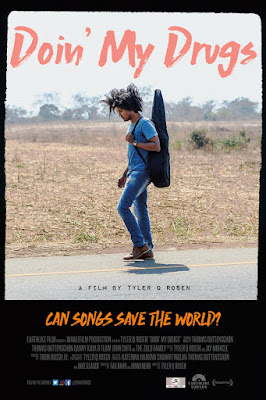 DOIN MY DRUGS is a look at Danish musician Thomas Muchimba Buttenschøn and his crusade to use his music to wipe out the AIDS epidemic in his native Zambia. It's a look at a county that doesn't really want to deal with its health crisis.
A good look at a health crisis we don't focus on any more. The big bugaboo that AIDS was in the 1980's and 90's has kind of died away in  many places because we now have drugs to control it. However in Zambia and in other places in Africa it is still ravaging the population because of fear and stigmas attached to the the disease.
To be honest the non-musical portion of the film is good but a bit too scattershot. There is a a lot of very serious discussions going on, but the trouble is that the it's not always as focused as it should be . More than once things seem to drift a little bit and interest. It's not bad but it keeps this just a good film instead of a great one.
What is great is the music. DOIN MY DRUGS is full of great music not just from Buttenschøn but also St. Maiko and Mwiza Zulu (the Zulu family), Brian Bwembya, John Chiti, Danny Kaya and B-Flow. If an album of the music contained in the film wasn't being released as well I would have demanded one. Even if you don't want to see talk of AIDS, you will want to hear the great music.
Releasing on VOD on December 1 and World AIDS Day, DOIN MY DRUGS is worth a look
Posted by Steve Kopian at November 29, 2020