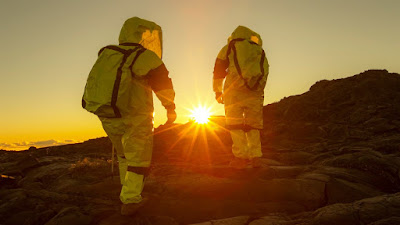 Six people are sent to a remote point in Hawaii in order to live in isolation, simulating the experience of living on Mars for a year. Most contact with the outside world is cut off. They can email and video chat with a 20 minute lag time. While in isolation they were given cameras to record their experiences.

What starts off in an expected way develops into an intriguing examination of what it would really be like to be stuck on another planet for a year. The seriousness of the exercise hits home about 20 minutes into the film when two of the "astronauts" are wandering outside in their suits (they must suit up to go outside as they would on Mars) when one of then realizes that their suit has gone quiet. This means that they are not getting oxygen pumped into the suit from the outside. When efforts to get the motor running again fail they have  then make it back before she suffocates.  Yes she she could have opened her suit and gotten some air, but if she was on Mars that wouldn't be an option. It's a grab you by the throat moment that hooks you makes you want to see how it all goes.

As a space kid of the 1960's, I remember watching the original moon landing, this was manna from heaven. This was a nifty little film that truly put into perspective what traveling to another planet might be like. The only thing that would have been better was if this was an actual report from Mars.

RED HEAVEN is a super film that will make you really ponder what mankind's future might hold.