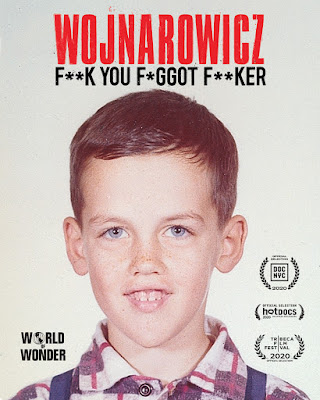 Portrait of artist David Wojnarowicz is one of the best films at DOC NYC.  Wojnarowicz turned his life into art and into a political expression. His work challenged the establishment, especially those on the far right who saw his use of sex, religion and anger as things inappropriate for publicly funded art.

While I know I've seen some of Wojnarowicz's art before I also know I had know idea what his name was or who he was. After seeing WOJNAROWICZ I now have a pretty good idea and I can't wait to dive in and explore his body of work some more.

Made up of the large archive of audio, video and writing that Wojnarowicz generated in his brief life (he died at 37 of AIDS) the film is the cinematic equivalent of hanging out with the man himself. His voice is constantly being heard via recordings and his art is forever flashing before our eyes. It's a life full of  darkness and light  that managed to produced some amazing pieces of art.

I was hooked from the opening minutes when we see Wojnarowicz in 1989 talking on the phone about art and politics. His work has come under fire because people are unhappy that a show displaying it took NEA money and they want it shut down. Nightline is interested in having Wojnarowicz on the show but he's not sure he's going to go. He thinks a minute before maybe he'd go on in a ski mask with a bucket of gasoline.

I really wish I could have met him, and more to the point I would love to know what he would make of the state of the world today.

Eye opening, mind expanding and politically challenging WOJNAROWICZ is a masterpiece. It is a ne of a kind biography of a one of a kind artist.