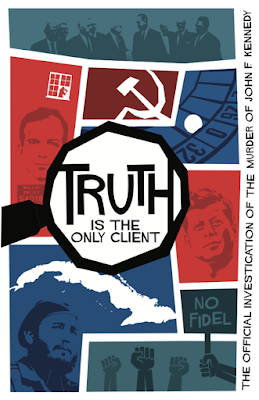 Who killed JFK in 1963? The answer the Warren Commission found was that Lee Harvey Oswald did and he acted alone. The trouble is that the report left too many questions unanswered and lose threads unresolved and almost immediately people started to pick it apart. Worse additional connections and evidence started to show up. Then a weird number of witnesses died under questionable circumstances. Worse a large number of people started to claim they were involved. Anyone looking at the crime now is going to find a lot of noise that may or may not belong there. Having been interested in the crime I am now convinced that short of a time machine we'll never know what happened.

On the other hand directors Todd Kwait and Rob Stegman  are pretty certain that the Warren Commission was right and they have brought together many of the surviving members of the Commission in order explain what they found and why they got it right. The result is a film that is going to be interesting  for JFK assassination nerds with an open mind and one that is going to wear the patience of most others.

Before I go any farther I need to say that despite my having problems with the film, I do think the film isn't bad. It nicely explains the case the Warren Commision put forward. That said the film has two problems that are related. big problem is this film is wildly over long. Running a solid two hours and twenty minutes the film gives us everything we need to know and then keeps going.  There is simply too much here and not all of it is necessary. The film could have lost some of the insistence that they got it right. And that is the film's other flaw is that too many of the people interviewed come across as having a chip on their shoulder. They are certain they got it right from top to bottom.  It becomes tiresome since the best way to win the argument is to provide some facts.

Worth a look for patient history buffs.