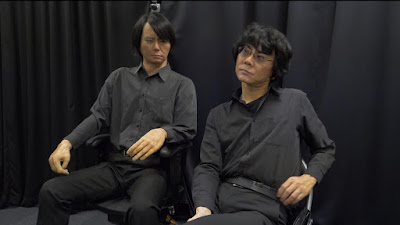 Abigail Child's ORIGIN OF THE SPECIES is a frustrating film. It is a thought provoking discussion of artificial intelligence in a headache inducing package.

The problem is Child has but this together in a blender. discussions trail off for sections where we get clips from old movies (such as Metropolis), trippy animation and pixilated images. The images shift around without a real rhyme or reason. Through much of the film I really had no clue as to what I was watching. Why was Child showing me the images? I wasn't certain.

And it's a shame because the discussion  getting lost is real food for thought. I like that Child has computers, robots scientists and other people weighing in on the subject. Wh at they have to say and what the discussions reveal give a real sense of where we are in creating AI and where it may really be going. I was intrigued enough that I was tempted to simply close my eyes and listen, however I realized there was just enough good visual information  that I had to watch.

I can not in good conscious recommend this film.