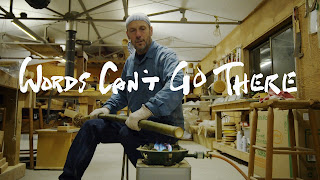 This is a portrait of John Kaizan Neptune who discovered the shakuhachi, the traditional Japanese bamboo flute and traveled to Japan to learn it despite not really being able to speak Japanese. It was the beginning of a lifelong journey that would take him across the globe.

I didn't intend to watch this film, I was in the middle of DOC NYC and it's crush of 200 films and the last thing I needed was yet another documentary.  For some unexplained reason I agreed to take a look and as a result I saw a sweet little film. Told from Neptune's son's POV the film is a lovely portrait of a father by a son. It's the the wonderful journey of a son trying to learn about his dad. As some one who was close to his dad before his passing this film really hit home at times.

Of course there is more to the film than the father and son relationship. There is the wonderful music.  Listening to Neptune make music alone and with others is really cool. I just smiled from ear to ear