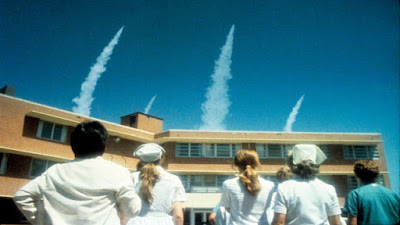 A look at the battle to make and air The Day After one of the most watched TV programs ever. The film was the story of what happened to Lawrence Kansas when a nuclear war happened and the population was left to its own devices in the days after the missiles struck. It was not a film that many people wanted to see air and indeed they had trouble finding sponsors.

Very good time capsule of a time almost 40 years ago when network TV could be bold and daring. The film reveals what it took to get made and how the battles between the people behind the scenes made for a classic of television. As several people point out nothing like this had ever been done before on American TV (Peter Watkins had made THE WAR GAME for the BBC 15 years earlier and ran into all sorts of trouble – despite it winning an Oscar). To be honest the only reason I’m not absolutely raving about Television Event is its single flaw- which is it can’t fully explain what it is like to watch The Day After unless you watch the film- nor can you really understand emotionally what that film meant coming in the middle of the Cold War.