Made in Hong Kong Opens 11/27 via Metrograph Ticketed Screenings 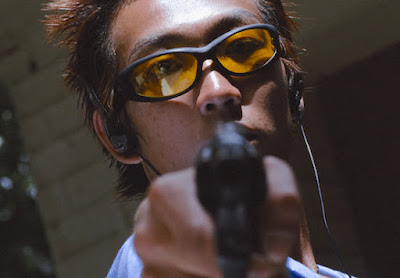 Fruit Chan’s first film burst upon the film scene in 1997 and heralded the arrival of a major filmmaker. While he had been working in the Hong Kong industry for years, (the film was shot on film stock he collected along the way) this was his first feature film at the helm. In the year of the hand over it rocked cages and made people sit up and notice Hong Kong culture. It was so well received it ended up as Hong Kong’s entry for the Oscar (though it didn’t get a nomination).

The film follows Autumn Moon a smart young man who acts as a collector for the local gangs. He acts as the protector for the large mentally handicapped Sylvester who is the target of scorn when ever Moon is not around. Moon meets and falls for Ping, the daughter of a woman he is told to collect a debt from. Things begin to go from bad to worse when Sylvester picks up two letters from the body of a young girl who committed suicide by jumping from a tenement rooftop.

At times, rough and jagged , yet always full of life MADE IN HONG KONG is a glorious slice of life. Very much of the time and place in which it was made it is a love letter to all of the people who we really never see in Hong Kong Movies. When the film came out in 1997 there didn’t seem to be any films that really showed what life was life in the tenements where most people lived. I know my knowledge, as far as cinema was concerned, was simply genre films. Anything approaching dramas was hard to come by, even in the back allies of NYC’s Chinatown. That the film traveled across the world and back again in the 23 years since it was made is an indication at how it opened the eyes of people across to the globe who saw for the first time that there was more to the city than gangsters, monsters and martial arts masters.

Watching the film for the first time in a decade or so in order to write up this piece I was kind of kind of taken aback. While the film is very much the work of first time director, at times there is a bit too much going on as if Fruit Chan wasn’t sure he was going to get another shot, the film is also incredibly assured and deeply resonant. Yes the film is set in 1997, and yes it has flourish from the films back then, but the exploration of life, friendship and love still is relevant today as it was back 23 years ago. To be certain Hong Kong itself has changed, especially in the last two years as the Mainland went to war with the city, but the sense of life remains the same. That the film still stands up is a clear indication as to why Fruit Chan is one of the great directors to come out of Hong Kong.
Recommended. MADE IN HONG KONG is being released for the first time theatrically in the US from Metrograph Films in the recent 4K restoration that was done in honor of the films 20th anniversary. It begins a run in NYC’;s Metrograph Virtual Cinema Friday.
Posted by Steve Kopian at November 23, 2020