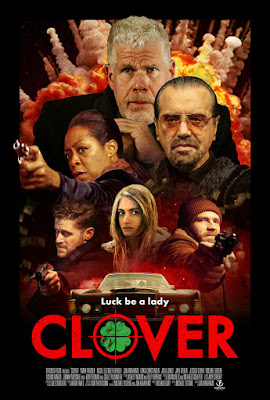 Sent to me billed as a crime thriller Clover is really a comedic crime story that isn’t really good. It is so bad it makes the ever wonderful Ron Perlman give his worst performance.

The premise of the film has two brothers running an bar on the short end to the mob boss they borrowed money from. Sent to out on a mission that will clear their debt things go from bad to worse.

The problem with this film is that the cast plays this as if walking around with an attitude is the same as acting. No one ever changes their expression nor shows any sort of range of emotion. The whole cast, Chazz Palmentari excepted wanders around as if they were in a comedy sketch. It’s the actors attitudes that lead me to believe this is a comedy because the script isn’t very funny. Actually the script plays like a thriller but without thrills. Its very funny but for all the wrong reasons.

To be honest if this film had been played as a serious thriller this would have been a nifty little thriller but the above it all performances of the cast just kill this.

This is a turkey of the highest order and one of the worst films of 2020
Posted by Steve Kopian at November 25, 2020

Email ThisBlogThis!Share to TwitterShare to FacebookShare to Pinterest
Labels: comedy, not worth the effort, thiller