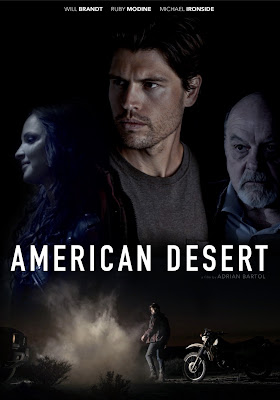 Home for two months a vet has slid off the wagon. His sister's boyfriend throws him out and he is left to fend for himself. He begins to put his life back together but then he makes the wrong sort of friends....
This is the sort of small film that I love to find.  It is a film that has been made with love  and a genuine desire to tell its story. It is a well written film that doesn't follow the well worn paths. Or to put it another way the script, like its hero, wanders into the desert to find hope.
I really liked this film a great deal. To be certain it can be a little jagged in some of it's presentations, but at the same time the film also gives us some absolutely stunning images and moments that transcend any and all flaws. Its these small moments coupled with the the script that make this a film that is something special.
To be honest I'm not sure why this film isn't being talked about by more people. The copy of the film I saw opened with a listing of all of the festivals it had played and the awards it had won. One would think that with all of that the film would have some word of mouth attached to it. Sadly it doesn't seem so and that is a real crime.
AMERICAN DESERT is exactly the sort of film Unseen Films was set up to highlight - something we haven't seen before. More importantly it is exactly the sort of film that regular readers of this site are looking for, a hidden gem or a diamond in the rough that will open up your mind and heart while reminding you that thee are filmmakers out there who care about what they are doing. This is a small film floating out in the cinematic world that is not like every other film out there. It doesn't go as you expect and we are better for it. More importantly it has a voice and vision all it's own. Yes it may look like other films but it is not. It is a film with something to say that isn't anything we've head before.
If you love good films you must see AMERICAN DESERT when it plays today at the Brooklyn Film Festival or whenever it plays elsewhere.
Posted by Steve Kopian at June 05, 2021