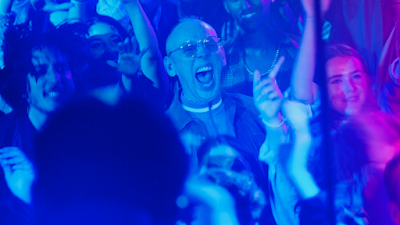 And it is finally time for this year’s Tribeca Film Festival! (see they are cheering in the picture above)

Rescheduled from it’s normal late April slot to a mid-June one, the festival is going hybrid, with live events across the five boroughs of New York City and a virtually one across the country.  Most of the in person tickets are free (and sadly sold out) however there are all inclusive passes which will get you into all the live events plus all the on-line content (this is pricey but you can go crazy).  There are talks and games and podcasts and VR films. Its insane.

There are hundred and something new feature films screening plus they are bringing back a huge chunk of last year’s films for in person screenings  as well.  There has to be around 200 feature films, plus a huge sked of short films from last year and from this year.

Basically if you love films this years Tribeca is going to be the cinematic promised land.

If you want to know how insane things are as this posts I will have hit the grey area of Tribeca coverage. What I mean by that is that there is a point where I am taking in so many films that things are starting to go grey as all of the colors of all the delights begin to overwhelm me and blend together. It usually happens around 20 films into the pre-fest screening, however this year the blurring happened around 35 films. What’s great about this year is that of all the films I’ve seen I only really disliked one. That’s a great ratio. And by the time the fest starts I should be another 15 films into the slate. And on top of that we’ve covered another 20 plus features from the returning group, which means going into the festival we've seen more films than most other fests run in total - but for Tribeca it simply means we've seen only a small part of the slate.

There are so many films I may end up broken by by trying to see it all... thankfully I'm not doing this alone and Ariela Rubin is returning. She is already hard at work watching films and writing them up as well so maybe I won't explode after all.

One quick note about my personal reviews this year- a number of them are going to be intentionally lacking in details. There have been a number of world premiere films where I went in knowing nothing and was carried along. I know that if I had read detailed reviews I would have been disappointed because the reviewers will have given things away.  While I would be happy to spill the beans if the film was out and widely seen, the fact that these films are just starting their festival appearances means I'm going to remain tight lipped.

Additionally I want the filmmakers and PR people to know that we are going to review everything that was sent to us pre-festival and everything we see during the festival, however because of the sheer volume of the films and pieces (as this posts I've slotted over 50 pieces on the festival) I am not going to be dropping reviews for many films exactly when the embargoes lift, some will be running later simply because I want each piece to get its due and not get lost if five reviews drop all at once.

And now the part of the curtain raiser that most people look forward to- the recommendations and the links to earlier reviewed films.

With the festival running a bunch of last years films on a big screen I will be having a post that has links to all of the earlier reviews. I was going to repost all of the reviews but it's too many and almost all of them are not getting a streaming release for the festival so I just putting them in one place so you can make a decision to see them or not on your own before they screen.

The following films we covered at earlier festivals and are due to be released shortly after the fest at which time I will be reposting the original reviews. Click on the title to see those original reviews

AILEY if you love dance you will love the film.
I CARRY YOU WITH ME one of my favorite films from last year.
MY HEART CAN'T BEAT UNLESS YOU TELL IT one of the best films of any sort I saw in 2020- just be sure to watch it from stat to finish.

I should say that we have seen all of the 2020 short films they are running this year and they are pretty much all worth seeing. Even the lesser ones are worth a look when screened in their respective blocks. I know I should link to the reviews but I realized it was going to be too complicated to put a post or series of posts together so it's easier to simply say see them all.

Two films are playing that I saw elsewhere but I did not write up and I'm to far out from seeing them to try and write something up:

ART OF POLITICAL MURDER I saw on HBO. Its the story of the assassination of Bishop Gerardi in Guatemala. Its  a very good look  at how a team of investigator uncovered a conspiracy.

WOMEN IN BLUE is a look at women of color who are police officers. Its a very good film on a very important subject, namely how do these women handle being part of an organization that is being pilloried as a source of racism. Its definitely worth a look. And I should have written it up when I saw it at DOC NYC last year but I simply ran out of steam.

And now the MUST SEES (all we be reviewed when the embargo lifts):

ALL THESE SONS- a magnificent look at two programs seeking to stop the violence in Chicago that will give you hope there is a way out.

PERFUME DE GARDENIAS- good times with great people.  A  hidden gem among the many films of Tribeca

POSER- I've seen this film multiple times and I'm still working out what I fully think. However any film that has me going back again and again when a whole film festival is lined up to see is worth trying. You just need to see it.

7 DAYS-Originally I was not going to put this charmer on this list but I keep recommending it everyone I talk to about the festival so I have to tell you to see it too.

SETTLERS is a melding of science fiction and westerns to tell the story of a group of homesteaders on Mas under siege. Do yourself a favor and see the film before you read about it.

KATA- a six minute masterpiece. It perfectly states everything I have been taught about martial arts.

LAST MEAL- what starts off as a funny piece on the condemns last meals ends up as a catch in you throat look at capital punishment. I think this will be in the Oscar mix.

NO RUNNING- Social commentary via science fiction or vice versa. Real life meets fantastic in the story of a young black man suspected of the disappearance of a friend.

ULTRASOUND My friend Liz Whittemore called this a mind melt, I think she was underselling it. The less you know the better off you are because this is one f-ed up ride. I'm not sure it holds to the very end but I assure you this is one trip you will want to take - just be prepared to talk to the screen for 100 minutes.

THE QUEEN OF BASKETBALL is a glorious portrait of a woman we should know. Another film destined for the Oscar mix.

I've been asked to hold my review of CREATION STORIES for the release, which is fine by me since they want to give people a chance to discover it on their own. I completely understand that. The film is a stream of consciousness memory play  as  Creation Records founder Alan McGee remembers everything while on a drug fueled trip to LA. Its kind of like an amped up TRAINSPOTTING with history crashing in. Its got a kick ass sound track and is waiting to be discovered by anyone wanting a wild and crazy ride. Trust me on this- its a one of a kind film that no words can explain- you just have to see it- and that my friends is a rave. (notice its coming at the end of the must see list.)

For more information and tickets for any of the films mentioned above or the two hundred other films, talks, games, VR and other good things go here.

Email ThisBlogThis!Share to TwitterShare to FacebookShare to Pinterest
Labels: tribeca 2021