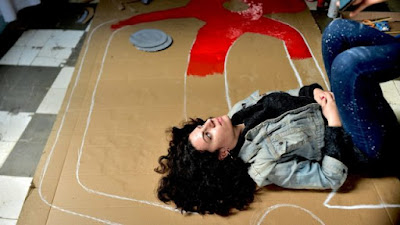 Cinema Sabaya is a charming film.

Based on director Orit Fouks Rotem ‘s experience running a seminar for video production with both Arab and Israeli women, the film charts the coming together of ten women from different backgrounds and age groups looking to learn to make films.  While things are rocky at the start, some of the woman want to know why the seminar is in Hebrew and not in Arabic as well, things quickly come together as the women find that they have a great deal in common.

This is a wonderful film. Despite being almost exclusively set inside the room where the classes are taking place it never feels claustrophobic. Frankly it wasn’t until I was looking up something in connection to the film did I realize that the film had one set. I say this because watching the film I never notice. I was much too lost in watching what was happening on screen. To me this was just like hanging out with some really interesting people for a coffee.

Actually the best thing I can say is that for a good chunk of the film I forgot I was watching a narrative and thought it was a documentary.

See it when it plays The New York Jewish Film Festival.