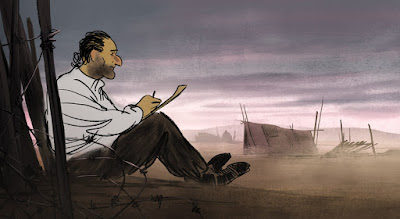 This is a portrait of illustrator  Josep Bartoli focusing on his time in a French concentration camp after he fled Spain for France during the Spanish Civil War. While in the camp he befriended a guard who showed him kindness.
I really liked this film a great deal. Forgive me if my thoughts are a bit all over the place but my reaction to the film threw out all sorts of thoughts and feelings that I really don’t want to organize because in doing so I think I’ll remove some of the wonder of the film.
The film was made in part to remind people of the terrible things that happened to many people who fled into France from Spain. Most people don’t know about the camps, I didn’t and to see what was done years before the Nazis got up and running is shocking. It’s a brutal reminder that cruelty is basic human trait that we all must overcome. Additionally the film is a reminder that some people are good even in the darkest times.
If you want to fully appreciate the film take a few minutes and look up Bartoli's art on line. Get a sense  of what his drawings are like and then watch the film. While the film does use some of his drawings in the film as the art work the on screen character produces, the actual animation art itself is also reminiscent of his art style. The framing of sequences seem to match the sketches. Looking at the sketches after the fact made me go back to the film and rewatch several sequences. It gave me a greater appreciation of the artistic achievement of the film itself. Frankly until I saw the mirroring of the films art to that of its subject I couldn’t understand why the film was animated. I mean the film would be a perfect live action film until you see the marriage of the various art forms and it becomes clear that the film had to be animated.
The film is a stunner. It’s an unexpectedly powerful film about the human condition. While I don’t think this is for small kids due to its frank language and handling of mature subjects it perfectly fine for older kids. It is also an absolute must for anyone looking for a great historical drama
Posted by Steve Kopian at March 07, 2022