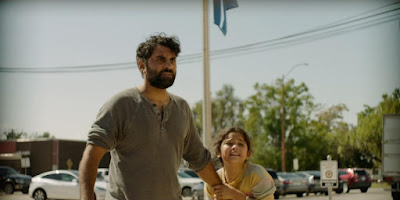 This is the story of a Punjabi truck driver who is trying to come to terms with life. His wife is pregnant and he isn’t certain how he feels. He is also not certain about where he stands in America. While he is making a delivery he hears banging inside the container. Discovering an undocumented girl from Mexico in the container he is pressed into helping the girl try and find her parents.

This is a solid little drama about two people trying to find their place in the world and in America. That last point becomes clear early on when we realize that the two people we are following have the wrong skin color not to be viewed with suspicion by authority. It’s a beautifully made film about what it’s like to be in America and not be the poster children for the country.:

To be perfectly honest most of this film is truly great. It’s a film that for most of its running time quietly tells its story and makes heart felt points along the way. The film only wobbles a couple of times when it decides to either up the ante dramatically or to push the point its trying to make a little to hard. There is a difference between leaning into a point and hammering it home, especially when the film is so carefully modulated emotionally that the pushed moments seem out of place.

Slight reservations aside this is a must see film and is highly recommended.