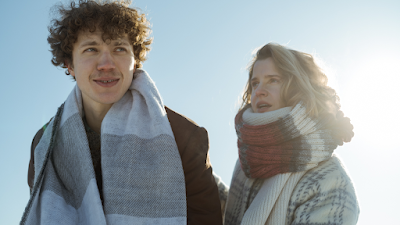 January is a loosely autobiographical tale of director Viesturs Kairiss time when he was heading to film school in January 1991.  The film is the story of Jazis who only wants to make movie and sees no point in anything other than that. As Latvia and the Baltic states are breaking off from the Soviet Union the country is invaded. He rushes off to film the stand off at the press offices to film the stand off where he is assaulted by soldiers. Joining a new film school that the Ministry of Culture has set up he falls in with other students where he learns about love, film and politics.

This nice drama is a little too subdued for my tastes. While the film has nothing wrong with it, it’s beautiful to look at, has great characters and performances, emotionally it’s a bit too muted for my tastes. For better or worse all of Jazis‘s emotions are directed toward films and the images he creates and I get that, but at the same time it crates an emotional atmosphere where we remain emotionally distant. Also it doesn’t allow for much in the way of emotional waves. While I was engaged with the plot and wanted to see how it all came out, I never was truly emotionally involved. I should have been moved at the end.

I should have felt something somewhere at some point but it never happened.

However as I said I was always curious as to where this was going to go.

Worth a look for those who are curious.