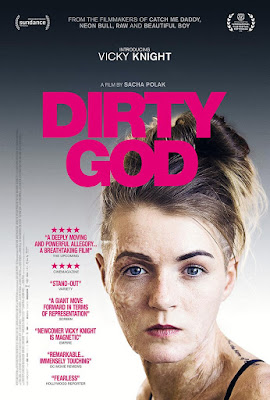 Vicky Knight deserves to be in the running for an Oscar and more with her shattering performance as Jane a survivor of an acid attack. Jane was scarred by her ex and now that she is out of the hospital she has to struggle to raise her daughter alone, but also adjust to the scars that cover her face and the reactions it causes in her friends.

It helps a great deal that we are looking at Knight's‘s face which was injured in a fire when she was eight (and modified by make-up). The fact that we are watching a real person and not a big actress playing ugly makes this film something special.  Actually the real reason this film is something special is Knight herself- she's one hell of an actress. She is so good that this film is a calling card that reveals her to be a towering talent, and if Hollywood or other producers  are smart  they will hire her for everything.  I don’t say that lightly , rather I say it because  all the emotion in DIRTY GOD comes from Vicky Knight. She makes us feel everything, all the pain and joy of being a single mom trying desperately to rebuild her life. That the film is a kick in the gut, is due largely to knight's performance. She pulls us in and drags us along.  She makes us care from the first frame to the last.

Also working to make this film work is due to the script. A finely tuned machine it never seems to dip into cliché. We are never certain how this is going to play out with the result we lean in closer to the action because we have to see what the next turn is going to be.

This film is a must. How good is it?  I bumped up this review from the home video release to time it to go with the VOD release on Friday.